END_OF_DOCUMENT_TOKEN_TO_BE_REPLACED

Hristina Ivanovska: “I am looking for myself through history and can’t seem to find me anywhere” (followed by photo/s)

Zeyno Pekulnu: “How to properly touch a girl so you don’t creep her out?”

Tomislav Medak and Marcell Mars: “Memory of the world/Public library”

Abstract:
This is the fourth in the series of performances that Hristina Ivanoska is conceptualizing, writing and executing as part of her PhD artistic research titled “Document Missing: The intricate sense of truth in oral histories”. Her research interest and artistic practice are entangled around the issues of suppression, control and construction of collective memory in regard to women’s resistance strategies and politics. As the only protagonist in her performances Hristina Ivanoska becomes a flexible and porous entity, a medium through which different identities can be brought back to life. Through her texts and actions she creates situations that ‘were and were not’ and are based on documents and oral interpretations that are fluctuating through time and space.

Reduced on a personal level that starts with the question “Who am I?”, Ivanoska found her counterpart in the character of Rosa Plaveva, a revolutionary woman from the turn of the 20th century that was forgotten in the archives of the past. Document Missing: Performance no. 4 (The Interrogation) is a phantasmagoric interpretation of a supposed interrogation of Rosa Plaveva that took place probably in 1951.

Bio:
Hristina Ivanoska is PhD-in-Practice candidate at Academy of Fine Arts Vienna. Ivanoska works interdisciplinary investigating social and political systems and their relationship to theory and history. She has exhibited at various galleries in Macedonia and worldwide. Ivanoska and Calovski co-founded “press to exit project space” in Skopje. They were representatives of Pavilion of the Republic of Macedonia at 56th Venice Biennial, 2015.

Abstract:
Rupture Sessions is a staging of a public reading of a conversation between a psychologist and four women living in Madrid about their personal experiences with eviction. Translated from the original recordings in Spanish into other languages (to date English and French), the transcript is a testimony to the everyday realities of contemporary crisis, bringing personal experiences into universal issues around social rupture and the disintegration of the home. The public reading of the text is a discussion and analysis of the conversation through aesthetic reflection. The circulation and introduction of the translated text into other configurations and conversations give impetus for reflection on issues, around contemporary crisis and its impacts on the home, a cross-pollination of ideas, which takes place within a dialogical situation. For the Skopje edition, Michelle Teran will collaborate with the new media center kuda.org and local participants and housing initiatives.

(The performance was part of the exhibition “Archives of violence”)

Bio:
Michelle Teran is a media artist working in a networked live-art practice. She became involved in the media arts after studying art history, theatre, cultural theory, painting and drawing at Hospicio Cаbanas in Guadalajara (1986-87), Instituto de las Bellas Arts, San Miguel de Allende (1987), and the Ontario College of Art. Her works are explorations into the intersections between social and technological networks, and the physical and media space that we embody and inhabit. She currently resides in Berlin. 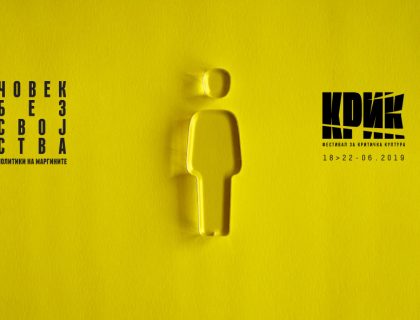 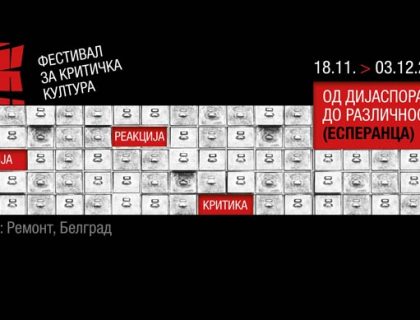